William E. Connolly has posted an interesting piece on Latour's Gifford Lectures on his blog. 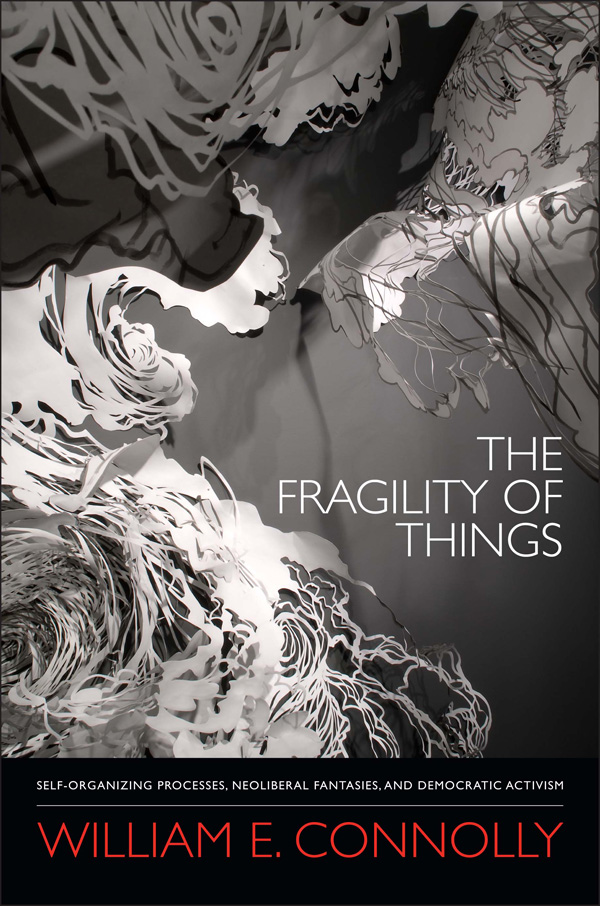 Well, I say it's on Latour's Gifford Lectures—for the most part Connolly takes these lectures as a jumping off point for a reflection on his own micropolitical interests; stuff that'll be familiar to anyone who's read his most recent work, particularly The Fragility of Things.

I think that he thoroughly misinterprets Latour's use of the word 'secular.' Connolly takes this to be referring to the 'new secularists' and their role as a political group. I see no evidence of that whatsoever. When Latour says that Gaia is 'secular' he means it, as I understand him, by contrast to Nature, which is an insufficiently 'secularised theological concept' (to use the phrase of Schmitt); it is because Nature presupposes transcendence and Gaia immanence that Gaia is secular—literally 'worldly.' Connolly is reading too much into that, I feel; although, it would be interesting to think how the new secularists would receive such ideas (not well, I'd imagine!).

Connolly also understands Latour as making a distinction between lab scientists and theoretical scientists—I must have missed that but I recall no such distinction being made, nor such a divide having any real importance. Latour waxes lyrical about the 'Earthbound scientists' but seemingly all manners of scientific praxis are included under this umbrella. The key point is that both lab and theoretical sciences must be irreduced, that is escorted back inside their networks; he has this to say about Stephen Hawking, for instance:


It is hard to point out a more situated knowledge than this one: from this very local place on Free School Lane, in the hands of a great scientist, electrons are supposed to have spread successfully to populate all chemical bonding and all computers! But in the next minute, the same physicists will have no qualms about admiring how Steven Hawkings’ mind roams through the whole cosmos in intimate dialog with the Creator, wishfully ignoring that Hawking’s mind benefits not only from a brain but also from a ‘corporate body’ described by Hélène Mialet in her book Hawking incorporated, as composed of a vast network of computers, chairs, instruments, nurses, helpers and synthesizers that are necessary for the step by step flow of his equations. With such a bifocal view of science, it is hard to reconcile the view from nowhere with the highly localised classrooms, office spaces, laboratory benches, computer centres, meeting rooms, expeditionary treks and field stations, where scientists have to locate themselves when they begin to really talk about their findings or to really write their papers. (86)

If anything Latour refuses the distinction between theoretical and lab sciences—both are fully instrumented, incarnated endeavours and that's the important thing about them. The Earthbound need theorists and lab scientists, both—and who embodies that fusion better than Dr Lovelock?


I am glad Bruno Latour gave these lectures. They focus attention on the severity of the planetary issue and the denials and evasions attached to it. I am also moved by the spirituality that infuses them.

Latour's theology is about as heterodox as one is likely to find anywhere. He refutes the possibility of any kind of fundamental transcendence; God is only what is assembled in the reverential networks of his followers; religious practice transfers no information, only the transformations of love and tradition. Latour's theology jars with most religious theory at least as much if not more so than his thinking jars with most theories of science. However, in these Lectures he also insists upon the translatability of different deities; taking up Jan Assmann's work on mono/polytheism to suggest that we must conceive of Nature, Gaia or OWWAAB (Out of Which We Are All Born) as secular divinities that are at least potentially comparable, translatable with the divinities of others (as were the divinities of the pre-monotheistic world), thus facilitating a geo- or cosmo-politics that removes (or at least de-emphasises) one unnecessary and, frankly, stupid point of confrontation: whether or not there's a God.

This very much plays into Connolly's project of conceiving of political alliances being built across ostensive cultural and religious divides; heterogeneous assemblages that cultivate a certain political vibrancy in anticipation of Events that will draw them together and produce a General Strike, or some-such. (I have my doubts about Connolly's working-through of this point but there's something to it.)

It might be a stretch to call Latour a 'spiritual' philosopher because his theology is so very anti-transcendence (even more so perhaps than Connolly, self-described 'immanent materialist'!). I don't think many of his fellow Catholics would consider him spiritual on the basis of his thinking. His recent book (recently published in English, anyway) on religion—Rejoicing: Or the Torments of Religious Speech—is a paragon of sensitivity and counterintuition but it is really questionable to what extent it is religious in the sense most people understand that (i.e. as spirituality). Just what is the point of a totally immanent God? Latour's theology is religious in the sense that Michel Serres describes religion as rooted in religiens, which is the opposites of negligens—i.e. 'religion is the opposite of negligence' (as he defines it in The Natural Contract). That is an extremely fecund point; I am converted inasmuch as this: 'Whoever has no religion should not be called atheist or unbeliever, but negligent.' To act religiously is an essential part of life, god or no god.

The real meeting point of Connolly and Latour is, however, pluralism—a pluralism that is political, not just metaphysical. It is this meeting point that presents the challenge; it is here that Latour's whole project of 'diplomacy' (taking up Stengers' term) comes into play. It'd be interesting to read a more sustained engagement by Connolly on this matter. There are clear, strong and (dare I said it?) vibrant parallels between these philosophies but also serious differences. Connolly, for me, leans too heavily on the notions of self-organisation. His reading of Hayek in Fragility is nowhere near critical enough either of Hayek's politics nor of the notion of self-organisation itself.

The problem with self-organisation (and I think this is a critique that needs to be impressed upon many, many... let's say post-Deleuzians who take up self-organisation as their ontological aesthetic of choice) is not the organisation aspect, it's the self—what is the self doing the organising? Gaia is, of course, a self-organising system but her 'self' is something that Latour takes some time discussing. She is not a 'super-organism' and not a final cause but rather the product of all the individual organisms, each of whom are their own final cause, their own providence, their own telos, each of whom follow their own interests but, in doing so, produce an effect, an agency in excess of themselves, an effective being that has maintained atmospheric and chemical conditions conducive to life (whatever that has meant in any given era) for billions of years.

For Hayek, of course, the importance of self-organisation is that it validates extreme market-based individualism (although Hayekian neoliberals are well aware of the need for a coercive state to force people to obey their own true selves...). The 'self' here is that of homo economicus, however contrived and enforced his existence may be. A methodological maxim: never speak of self-organisation without speaking also of a self.