“We scientists are on a warpath” – Gaia: Global Circus

Last Saturday evening, I had the great pleasure of attending the first UK performance (and, indeed, the first in English) of a play written by Pierre Daubigny and organised by Bruno Latour – ‘Gaia: Global Circus.’ 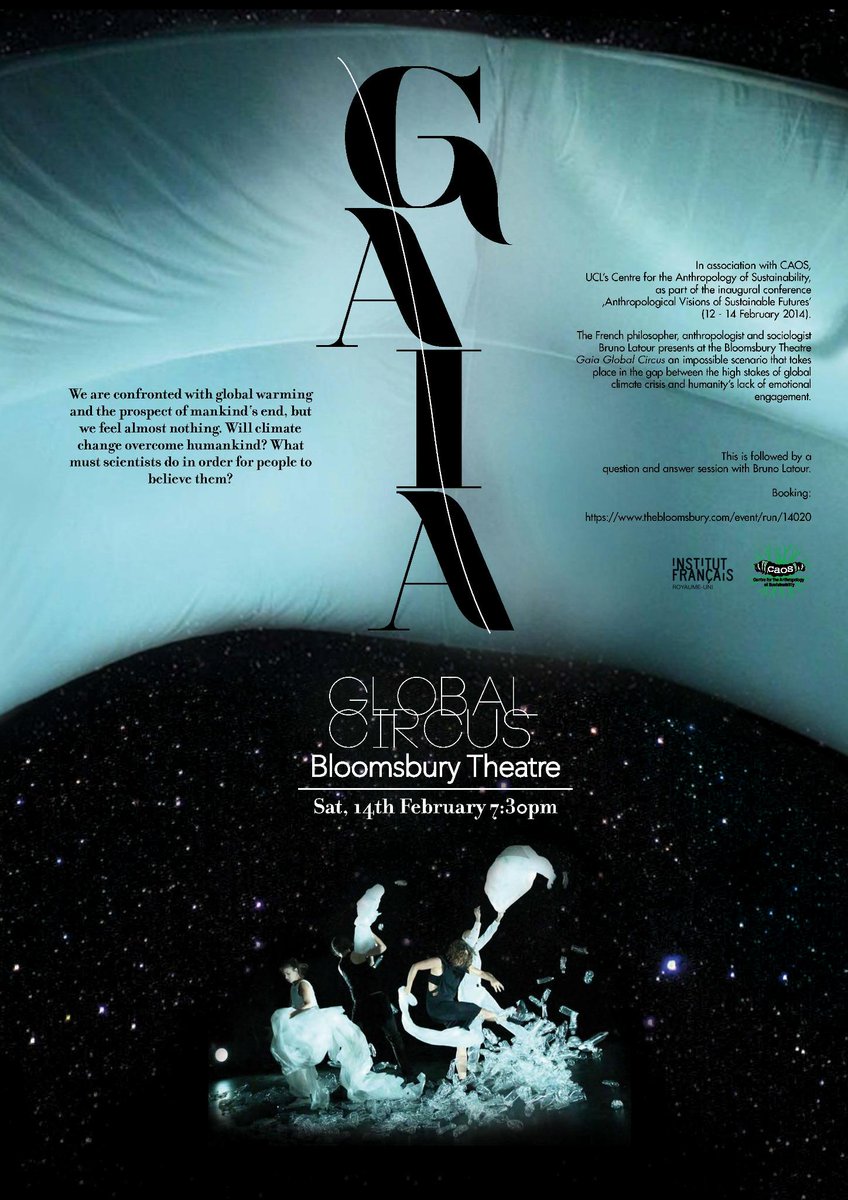 It should be noted immediately that I am a total and complete plebeian when it comes to the theatre. Nevertheless, some thoughts:

What is Gaia? I am tempted to quote Hobbes and say a ‘mortal god.’ However, if we think of the famous frontispiece to Hobbes’ book, we find a problem with this allusion.

Hobbes' Leviathan, at least as it is visualised here, suggests something organ-ised in the most profound sense. Gaia, on the contrary, does not have – does not have yet – any sort of apparatus or dispositif (political, legal, religious, scientific) that could broadcast her 'eviction notices,' as I have called them, with anything approaching a singular, booming 'old Testament' kind of a voice. The phenomenology is more that of earth-shaking claps of thunder and blinding bolts of lightning that we are all stumbling around, bumping into each other trying to understand.

Galileo's 'and yet it moves' (apocryphal or not) is a crucial phrase. Oh, he had no idea! Certainly, Gaia has the authority to decide to 'move' as she pleases 'whether we like it or not' – so much more so than Galileo could even have imagined; however, one scientist's self-righteous mutterings does nothing for the problems we face.

It is this not-yet-assembledness that, I think, 'Gaia: Global Circus' explored. I will not attempt to summarise it in detail. It was too inventive and multi-layered to be précised in any useful way. From the very first scene, events constantly folded back on themselves, going one way and then stopping, resetting and approaching their topic from another angle, with an ever shifting array of personae.

The star of the show was perhaps the canvas, the canopia or the ‘sheet with balloons attached to it,’ as one audience member commented, that dominated the stage. It could be manipulated in such a way that it was facing the audience and acting as a projection screen; at other times, it was pulled and tussled so as to convulse and summon up a storm; it lurked above the stage for a time before being pulled down so as to conceal and partition the space; finally, and by way of finale, it floated out over the audience, encapsulating them. This was an impressive technical achievement (although one of the actors did remark at the end on the difficulties they would be in if a balloon burst!), however it was also a poetic one as the device never seemed extraneous to the performance – on the contrary, it was integral.

A few words must be added for the four actors whose performances were remarkable, particularly considering that portions of the play relied heavily on improvisation and that they were doing this outside their first language. Being that funny and that engaging under those conditions deserves applause in itself.

And on that point, humour! A play on something as serious as climate change and environmental destruction could easily lapse into a kind of dour, pious sagacity. This was averted by simply being consistently very funny (as one might well expect from a Bruno Latour production).

The most important point is that the play attempted to enact the stuttering, uncertain beginnings of the representative invocation of a sovereign. We are not yet ready to carve Gaia’s image in brass, all her features clear and distinct. In terms of Gaia’s fictive representation, we remain at a much more impressionistic stage, for political, religious, artistic and scientific reasons. A stage well suited to... the stage!

On this point, a tangent beckons me... It'd also be interesting to investigate, in the style of von Uexküll, how Gaia perceives us. What are we to her? We are not ambulating beings, wandering around, faces wobbling, eyes blinking – we are chemicals and heat; we are a chemical burn, an itch. Perhaps that should be factored into our representations. Gaia is 'ticklish' but only in response to very specific stimuli. Our pleas will not be heard! She should not be imagined as having eyes, ears. Perhaps she should have a nose, a giant and over-sensitive nose. She will be monstrous, in any case. Maybe less a task for a fine artist than a cartoonist. Something out of H.P. Lovecraft.

Gaia can call on no Leviathan; by this I mean that there is no assembly so coherently assembled as to legitimately declare itself the medium of her 'Word' and, therefore, the task of translating her coded, gaseous missives into affective and cognisable messages falls on Earthbound scientists, politicians, religionists, etc.

At perhaps the pivotal moment in the play, one character declares with defiant force: "we scientists are on a warpath!" I’ve been critical of Latour’s use of ‘war’ as a concept previously. As I mentioned in the conclusion to my recent article, there are problems of translation when adapting these ideas for political geography (which is my interest). The matters of concern that must be taken into account there involve ISIS in Iraq, Putin in Ukraine, Obama's drones in Pakistan, the walls and fences being built in Israel, Texas, India, Saudi Arabia's plan to build a fence around their entire territory (!), and so on. Consequently, one must be very careful when talking about 'war' and violence in this context.

And, in light of that, I think 'warpath' is good alternative to 'war.' It indicates an attitude – which is serious, passionate, angry, implacable, forceful, being prepared for violence – but doesn't conflate what we are doing with what we are trying to prevent ('all out' or 'total' war). In Lippmann's Phantom Public he remarks that a war could perhaps be fought for democracy but it couldn't be fought democratically. We are most definitely on the path to war. Those fences on the borders of the EU, those migrants drowning in the Mediterranean, those drones in the sky – these are geogovernance and geostrategy at work (and the Pentagon is not where you'll find the climate deniers...).


A climate scientist arguing fiercely with a denialist at a public meeting may lack a ‘sovereign’ to whom he can appeal to settle the dispute; however, no matter how much they bellow – no matter even if they brawl – they are not ‘at war’ in a sense that should be so easily literalised. [...] We would do well to remember the difference between heated arguments and charred flesh, even if we are staring at a future that is going up in flames.

So, the sense of 'being on a warpath' modifies this vocabulary notably. It becomes possible to state that we are engaged in a secret war with Gaia but, for the most part, a nervous peace amongst ourselves. There are relations of domination, violence and injustice, of course, but 'total war' is, for now, absent. Those 'on a warpath' must insist that, if we are not very careful, we are headed for worse. Those walls, fences and other fortifications are there for a reason and Gaia will not differentiate between polluters and non-polluters. Nothing proves that the crimes of the last century are unrepeatable.

More could be said, much more (particularly by someone who knew what they were talking about). Nevertheless, the play has achieved what it set out to do, from my perspective at least: to provoke thought.
Posted by Philip at 18:10