Determinism, environment and geopolitics: an interdisciplinary conversation (now with words and pictures)

[As the year speeds onwards at a frankly alarming rate, the RGS-IBG conference for 2015 is now only a week away. For my part, I'm organising a round-table discussion session on the subject of geographical determinism. My introductory remarks and slides follow.] 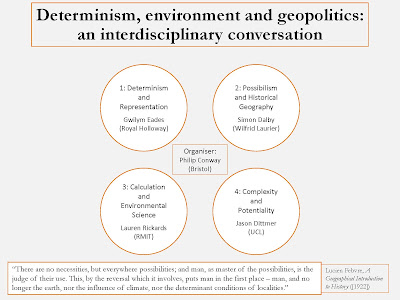 [If these images appear very low quality, click on them to see a higher resolution version.] 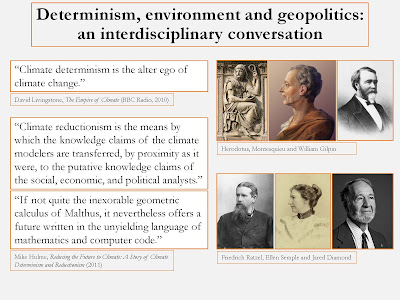 As David Livingstone put it in the conclusion to his 2010 BBC radio series The Empire of Climate: “Climate determinism is the alter ego of climate change.” Seldom have the two been separable. So it is today.

Herodotus and Hippocrates; Bodin and Montesquieu; Gilpin and Buckle; Semple and Mackinder; Huntington and Haushofer; Diamond and Kaplan – the lineage of deterministic thinking is long and will be familiar to historians of geographical thought.

Long, familiar and, as the likes of Mike Hulme have recently argued, renascent. Hulme finds determinism alive and well in what he calls the “transfer of predictive authority” effected by institutions such as the IPCC that define human futures in terms of climatic calculations.

“If not quite the inexorable geometric calculus of Malthus,” he writes, “it nevertheless offers a future written in the unyielding language of mathematics and computer code.”

To paraphrase the post-punk band Mission of Burma, how might we escape this certain fate?

It is motivated by the conviction, first of all, that these issues are of pressing contemporary importance but also, secondly, that while many scholars, within geography and elsewhere, are working on such matters, they are doing so rather disconnectedly. This session attempts to initiate a more cohesive conversation. 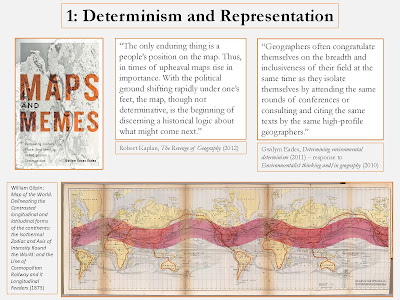 In his 2012 book The Revenge of Geography: What the Map Tells Us About Coming Conflicts and the Battle Against Fate, the travel writer-cum-geostrategist Robert Kaplan caused something of a stir amongst geographers by reintroducing the principal tropes of late-nineteenth century geopolitics to popular discourse.

“The only enduring thing is a people’s position on the map,” he writes. “With the political ground shifting rapidly under one’s feet, the map, though not determinative, is the beginning of discerning a historical logic about what might come next.”

While disavowing determinism per se, he wholeheartedly embraces “partial,” “hesitant” and “probabilistic” determinisms, approvingly attributing these varieties to Herodotus, Halford Mackinder and Raymond Aron, respectively. One is reminded of Mackinder’s famous line: “Man and not nature initiates, but nature in large measure controls.” Human possibility is present but it is radically attenuated by ‘The Map.’

Reading texts like this, it can seem as though we have scarcely budged since the era when speculator-futurists like William Gilpin were mapping out the climatic regions deemed, from the eye of Apollo as Denis Cosgrove had it, hospitable to civilisation.

Against this, I do not doubt, all too familiar geo-ocular sensibility, we are very lucky to be able to pose Gwilym Eades, armed with his new book Maps and Memes: Redrawing Culture, Place, and Identity in Indigenous Communities. It is also worth mentioning his 2011 article in Progress in Human Geography, titled Determining environmental determinism. This short piece, written in response to a forum published two issues previously, confronted both the determinisms and the anti-determinisms then under discussion.

Gwilym, usefully I think, both challenges geographers’ preconceptions of their own openness to other points of view and, at the same time, draws attention to the many epistemic determinisms that we can all wittingly or unwittingly entertain. 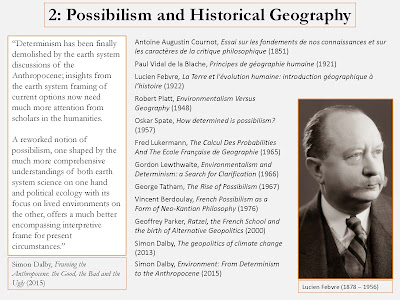 But what of our response to determinism? What of the alternatives?

Possibilism is a term attributed to the historian Lucien Febvre [though it has a prehistory in French radical politics]. He, in turn, ascribed it to the geographical works of Paul Vidal de la Blache and his followers. In contrast to the likes of Friedrich Ratzel in Germany and Ellen Churchill Semple, who interpreted Ratzel for an Anglophone audience, the ‘French School,’ it was claimed, eschewed determinism and adopted an ethos of possibility.

Although largely forgotten today, possibilism was a common talking-point of geographers throughout the middle decades of the twentieth-century. Much more recently, it has been taken up by Simon Dalby, who has called for: “A reworked notion of possibilism, one shaped by the much more comprehensive understandings of both earth system science on one hand and political ecology with its focus on lived environments on the other […].”

I, for one, can concur. However, in order to rebuild possibilism, I think that it’s necessary to understand what possibilism has meant in the past, in rather different geopolitical and geo-ontological circumstances – and this is not at all clear.

Is possibilism, as Gordon Lewthwaite had it in 1966, a matter of erring on one side of a “continuum” that has free-will at one end and determination at the other? Is it, as Vincent Berdoulay wrote in 1976, a form of neo-Kantian philosophy? Perhaps the most interesting interpretation for me, particularly if noted in relation to Kaplan’s embracing of Aron’s ‘probabilistic determinism,’ is Fred Lukermann’s argument in 1965 that the possibilists were really heirs of Antoine Augustin Cournot. Contrary to the likes of Pierre-Simon Laplace, Cournot argued that it was not human ignorance that necessitated probabilistic calculation; rather, reality itself was indeterminate – and geographies were, therefore, to quote Lukermann, “explanatorily describable only by a calculus of probabilities.”

In short, possibilism demonstrates, I think, that ‘interdisciplinarity’ must mean not only putting critical geopolitics into conversation with physical, environmental and climatic sciences but, also, with the history of ideas.

And speaking of calculation… 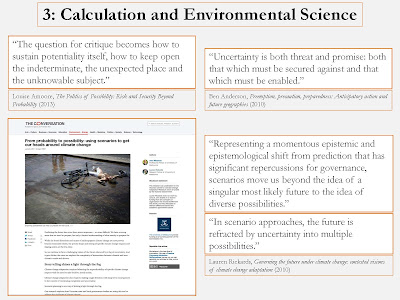 For many years now, the critical thinker has been an ally of the indeterminate. This relationship was more or less straightforward. To critique was to open up, to destabilise; the oppressive was the closing down, the narrowing, the determining; liberation was to be found in the embrace of radical potentiality, in the incalculable.

I do not wish to suggest that we should undo this legacy; however, this relationship can no longer be so straightforward. To have so much as a conversation about ‘the Anthropocene,’ ‘the climate’ or even, simply, the future, today necessitates, at the very least, some discursive absorption of the progressive produce of calculative rationality.

How can we resist “transfer[s] of predictive authority,” in Hulme’s words, while not, at the same time, becoming ‘Merchants of Doubt’? How can we integrate the biological, climatological, geographical and environmental sciences in a more cohesive way, eschewing, as Gwilym advises, any complacency with regard to geography’s interdisciplinary achievements? How do we engage with probabilistic thinking without reproducing the kinds of conservative politics promoted by the likes of Kaplan and Aron? How are we to grapple with a world that is, after Cournot, unpredictable in itself?

When to calculate and how? This is a question that Lauren Rickard’s work on scenario planning may well help us to answer. In her 2010 paper Governing the future under climate change: contested visions of climate change adaptation, Lauren writes that scenarios represent “a momentous epistemic and epistemological shift”. Ridding us of the “idea of a singular most likely [or, we might add: most probable] future,” scenario exercises, at least in some of their iterations, facilitate co-produced climatic futures in a way that pluralises and democratises the process of envisagement.

“In scenario approaches,” she continues, “the future is refracted by uncertainty into multiple possibilities.” 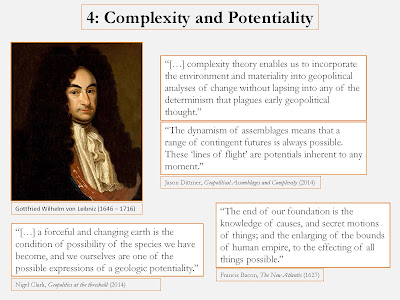 Rethinking the role of geographic and climatic knowledge in relation to Anthropocenic political pressures is plainly a vast task – one that brings into question some of our most fundamental concepts: earth, world, environment, history, time…

There is no avoiding it: the spaghetti junction of interdisciplinarity to be constructed on and around a reformed environmental geopolitics must include a well-paved road to philosophy.

We might look, then, to works such as Jason Dittmer’s 2014 article Geopolitical Assemblages and Complexity. Drawing on the works of Gilles Deleuze, Félix Guattari and Manual DeLanda, among others, Jason attempts to articulate “a materialism without determinism” – a materialist ontology for geopolitics that sidesteps the dualistic bifurcations of modernism.

Complexity theory, he writes, “enables us to incorporate the environment and materiality into geopolitical analyses of change without lapsing into any of the determinism that plagues early geopolitical thought.” Following, in fact, in the footsteps of Cournot, this ontology refuses any mechanistic or reductive model of causality – everything is observed to depend on everything else and every explanation is, therefore, necessarily a simplification of a more complex and dynamic reality.

But we could, I think, gainfully go back further than Cournot, to another crucial figure in the history of probability: Gottfried Wilhelm von Leibniz famously argued that we live in the best of all possible worlds. Crucial to his Théodicée was the concept of ‘compossibility’: a possible world is composed of beings that are compossible.

Setting aside the excesses of Leibniz’s peerless optimism, we can turn his concept to our purposes. To state it most plainly indeed: the present composition of carboniferous civilisation is incompossible with the Earth.

What we need, then, is not the possibilism of fin de siècle French idealism, as Vincent Berdoulay identified it. Rather, we need a possibilism, or a compossibilism, that can assume indefinite multiplicities of open possibilities but that is also pressingly and incessantly aware of the unavoidable facticity of vast, inhuman forces utterly beyond our ken and control.

A possibilism fit for the Anthropocene. 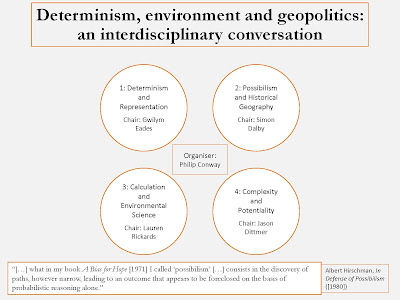