After much ado about many things, the session Determinism, environment and geopolitics: an interdisciplinary conversation finally went ahead in the last time-slot of the RGS-IBG conference on Friday. Being at the end of a very long week (and having been shifted around several times), the group that assembled to converse was, shall we say, select. However—quality over quantity!—, we had an excellent conversation and one that emboldens me to persist with this line of enquiry. Indeed, both the theme and the format were roundly appreciated, which bodes well for the future of this project.

Most pleasingly, around half our number identified as being environmental or physical geographers of some kind rather than simply social or human geographers (RGS-IBG tends to be overwhelmingly dominated by the latter).

Gwilym Eades spoke about his fascinating on-going work on place, naming and counter-mapping. With a background in physical geography and GIS, Gwilym is exemplary of the cross-boundary thinking that is possible within geography. He drew attention to the novels of Thomas Hardy, the interesting point of which here is that they were almost obsessively topographically planned out and mapped. 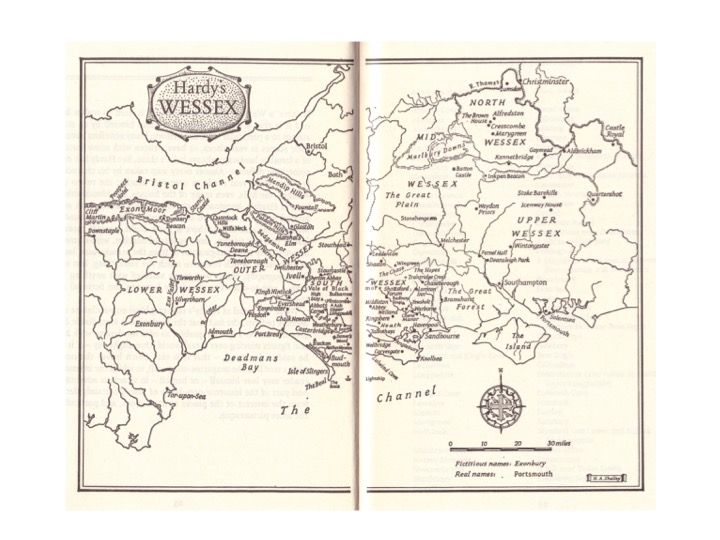 This fictional Wessex, very closely tied to but nevertheless distinct from the historical Wessex, has become a matter of concern for campaigners who wish to preserve the fictional-historical landscape. When these cosmopolitical clashes come to concern, for example, wind farms then we do indeed witness a very distinctive Anthropocenic politics coming to the fore—one that eludes any easily disciplinary categorisation.

What is useful about this, for me, is that it draws attention to the importance of representation and mass mediation for these debates. Determinism is as much about epistemic politics as it is about the workings of things. There Is No Alternative—this is the fundamental maxim of determinism. How do fictional-environmental matters of concern, fictive landscapes, come to compel assent to this or that political campaign? What possesses people to pursue this bond or allegiance and not that one?

One related issue that came up was that of affect and political passions. I am particularly interested in Albert Hirschmann's 1977 book The Passions and the Interests: Political Arguments for Capitalism Before Its Triumph. It seems to me that many discussions of affect in geography could benefit from a connection with this sort of work.

It is part of what I am trying to get at with the concept of 'possession'—what if, to quote the book/film Fight Club, the things you own end up owning you? That is, what if we become possessed by our possessions? This seems to me to be intrinsically tied to the problem of possibility and possibilism. Any reconception of possibilism must also reconsider property and properties (in legal-social and metaphysical senses, both). (See this wonderful article on the genealogy of spirit possession for the importance of this concept in relation to colonial geopolitics.)

This sense of being a container for something other than us (and yet not altogether other) is the unsettling experiential condition that derives from social existence and 'ecstatic' phenomenality (i.e. the sense in which, in experiencing the world, we are somehow 'outside' ourselves). There is a great deal of work being done on affect, emotion and phenomenal experience in human geography; however, little of it connects, as Hirschmann's work does, with considerations of mass mediation (cf. the geopolitics of Hardy's Wessex), mass manipulation and the basic concerns of war, peace and social order.

Among the other issues discussed were mental health and the pressure put on climate scientists by researching such frightening futures; the ways in which the discursive practices of consultancy combine deterministic and possibilistic statements (with apparent impunity to consistency!); the etymology of optimism (a concept that I have written about a little), emerging as it does in Voltaire's famous satire of Leibniz; the production of 'false' or artificially generated datasets in order to test algorithms against other worlds than this one (I know of this in epidemiology research but apparently it is also being undertaken in climatological research too); the limitations of 'assemblage' thinking with regards to overemphasising degrees of freedom.

There was more but these are the points that have stuck in my mind (and to my page)!

All of this brings me to reflect on my last post and the fact that, even in geography—as open to interdisciplinarity as geography is, perhaps more so than any other discipline—there is still an extreme pressure to specialise in this or that field, whether it is defined formally or by invisible lines that are navigated as if semi-consciously, as if by scent trails!

It has been repeated to (and perhaps beyond) the point of cliché that the Anthropocene razes old disciplinary distinctions and compels much greater communication between specialisms. We are definitely not there yet. However, there are enough talented scholars that recognise the problem to convince me that we might get there in the coming years.

One final thought that comes from one of the participants who remarked that human geographers can be very intimidating to those coming from the outside. I hope that the way in which I have presented my ideas was accessible—albeit idiosyncratic and of course slanted towards my own peculiar interests. However, I think that it is an important point. (It also came up in a less explicit way in the Verticality and the Anthropocence: politics & law of the subsurface [in collaboration with the British Geological Survey] sessions on Thursday.)

There is also great pressure amongst human geographers (and those working in the humanities and social sciences generally) to cultivate a kind of aura of supreme intelligence (which often leads, ironically, to supreme unintelligibility!). Perhaps because we can so rarely point to experimental objects, hard numbers or established principles, we adopt a form of sublime self-justification, in the sense of the sublime described by Iver Neumann in his article on Sublime Diplomacy: Byzantine, Early Modern, Contemporary. We attempt to create an effect (and indeed an affect) of knowingness that can, in fact, get in the way of talking with others who justify their works in quite different ways. (On Justification: Economies of Worth by Luc Boltanski & Laurent Thévenot might be useful on this point.)

There is a degree of self-criticism needed here that recognises the distinct truth regimes involved and attempts to find ways to, as Isabelle Stengers would put it, make them 'contrasting rather than contradictory.' This diplomatic work is extremely difficult but I am surer than ever that it is worthwhile.
Posted by Philip at 13:07