Clarence Glacken’s ‘Traces on the Rhodian Shore’ at 50: Summaries and reflections

As per previous posts, last week I attended the RGS-IBG annual conference and organised a session at on Clarence Glacken’s ‘Traces on the Rhodian Shore’ at 50: Nature, Culture and ‘Western Thought.’ It was a great session and I’m very grateful to everyone who came along, particularly to the three excellent panellists, David Livingstone, Georgina Endfield and Innes Keighren.

I posted my introductory comments on here previously. However, perhaps the best introduction to Glacken might be found in this interview with Allan Pred from 1980, uploaded by the late Anne Buttimer.

It shows Glacken as a soft-spoken and thoughtful man, as befits his reputation according to everyone who knew him.

Despite scribbling away at top speed, I by no means recorded all the points made during the very interesting presentations and ensuing discussion. However, I thought it might be interesting to collate some of the major ideas and issues encountered.

Undoubtedly the most immediately striking thing about Glacken’s book is its sheer size and density. Not only is it over 700 pages long, it packs an extraordinary quantity of information onto every page. All three panellists confessed to, in one way or another, reading the book more as an encyclopaedia or point of reference than something that could be gainfully absorbed as a whole.

Such a book, it was agreed, is rarely written these days. Indeed, as David pointed out, the anthropologist Jacob Gruber’s review of the book from 1968 already noted that “the scholarly tradition within which such a book can be written is disappearing.” It is perhaps not true that Very Large Books are no longer produced in this kind of area – take, for example, Maria Rosa Antognazza’s intellectual biography of Leibniz, James Turner’s history of philology, or Geoffrey Parker’s account of climate and crisis in the seventeenth century (to name but three). Nevertheless, the conditions under which Glacken’s tome was produced – taking a decade to research and write, for the most part without tenure – are certainly difficult to reconcile with our ‘output’-oriented present. 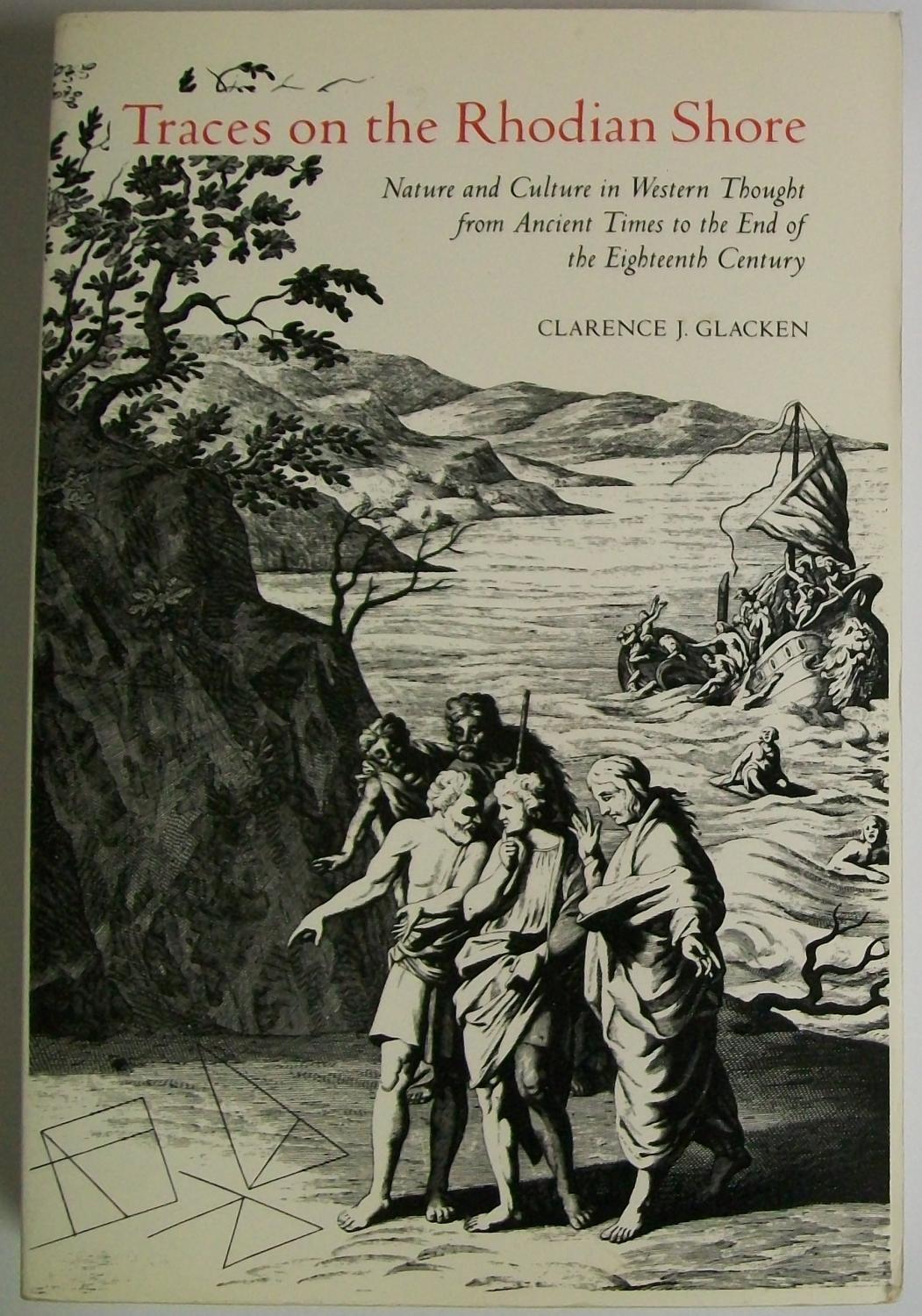 The status of Traces within geography is also an interesting point to consider. Few undergraduate programmes include the history of geography in much more than a rudimentary manner. Innes made use of his bibliographical skills to tell us that there are around 50 copies of the book at 38 UK academic libraries – not many considering its apparently canonical status. It is often cited by geographers as a classic text but just how often is it seriously made use of? This also might not be such a new issue. While Traces was widely reviewed in the years following its publication, it was neglected by the Annals of the Association of American Geographers until Yi-Fu Tuan’s review in 1977.

There are various aspects of the book that might be faulted by specialists. For example, while possessing considerable linguistic skills, Glacken’s use of translations, particularly of ancient texts, sometimes led to errors of interpretation. However, I think it was generally agreed that such criticisms, while of course legitimate, are also a little bit beside the point.

Traces provides a profound resource for those wishing to engage with the history of geographical (and not only geographical) ideas. As Georgina put it, the book takes us “into the realm of the environmental imagination.” Of course, we cannot in any way straightforwardly take, say, Plato to speak for his time and place. However familiar such sources may seem, there are always problems of anachronism and partiality. Nevertheless, as Glacken himself put it (p.503), “their questions suggest our questions.”

As I mentioned in my introduction, the style of historiography that Traces embodies has been out of fashion for around as long as the book has been with us. When Quentin Skinner wrote his famous essay Meaning and Understanding in the History of Ideas between 1966 and 1967, he apparently had trouble getting it published (it appeared in print in 1969). One of the pillars of orthodoxy against which he took aim was precisely the longitudinal style of Arthur Oncken Lovejoy, which (I would argue) Glacken was very much working within.

Today, it is the epistemological tradition of Foucault and the contextualist tradition of Skinner that are rather more conventional. We are generally concerned with radical ruptures rather than with recurrence and repetition – indeed, the very notion of continuity tends to be dismissed as conservative.

But this itself might be taken as somewhat outdated thinking. Given all the earnest pronouncements concerning ‘the Anthropocene’ in recent years, are we not by now accustomed to the idea that our notions of temporality are being scrambled?

The opposition of the longue durée to histoire événementielle, in the terms of the Annales School, presupposed that structures of ‘nature’ changed at only a glacially incremental pace compared to the ever-fluctuating realm of human activity and consciousness. Now that we understand the ground beneath our feet (and the air around our heads) to be far from stable, durable or enduring, are we not also brought to question the ‘revolutionary’ quality of our ideas? If one is moving rather faster, do we not find the other to be moving rather slower than we would like? Issues of inheritance and recurrence therefore become important once again.

Much more was said than this and there remains much more to be said on these issues. However, just a few more things should be added by way of conclusion (now speaking only for myself).

Books such as these are rarely written – and rarely read – today. The political economy of academia (and, of course, not only academia), if it does not exactly prohibit, certainly dissuades the sort of creative ambition found in this text. It promotes ambitions of rather sadder and more self-regarding sorts.

This book was, as its subtitle openly declared, a history of ‘Western Thought.’ There are various ways in which this partitioning might be challenged today. First, it does not do enough to account for the ways in which Euro-Americans absorbed, acquired and (often violently) appropriated knowledge (and not only knowledge) from around the world. It tells us a lot about the ‘what’ and not a lot about the ‘how.’ Moreover, while Traces never passes judgement on any tradition and never assumes the superiority of its own, nor does it do much to unsettle such hierarchies. It is quite comfortable being where it is and doing what it does (in a way that makes me, personally, quite uncomfortable).

However, these are, I think, by and large forgivable limitations for a book that undoubtedly pushed those limitations it did challenge to quite a remarkable degree. Nevertheless, it does bring to my mind a question.

As I noted in my previous post, the conference theme of ‘Decolonising geographical knowledges’ has been criticised for placing rather ephemerally conceived ‘knowledges’ ahead of “structures, institutions and praxis” that pertain to the continuation of colonial processes of exploitation and exclusion. It is not enough, therefore, to speak only in terms of knowledges in order to address what decolonisation properly entails.

The question that is brought to my mind concerns to what extent there is cause for solidarity, and indeed sympathy, to be found here.

If a book such as Traces stands as an artefact of conditions that few can, today, expect to inhabit, this suggests to me that the very ambition, the very ‘will to connect’ diverse ideas and knowledges over space and time, is being asphyxiated by those conditions that we do find to prevail. The relentless drive to instrumentality and short-termism is of a kind with that which marginalises and demeans those whose traditions are not those of ‘Western Thought.’

I hasten to add that I am in no way suggesting that the struggles of decolonisation should be equated with those of white academic historians – most certainly not. The relative degrees of exploitation and exclusion are in no way equivalent. And yet they are not altogether unconnected.

If we wish to write books such as these today – whatever the shortcomings of the genre to date – such a creative adventure presupposes freedoms that few, if any, of us may enjoy.

This is a thin gruel as regards nourishing the political dynamics of the history of geography – dynamics that I, for one, found rather lacking in the conference last week. However, I conclude with this thought because the thing that I really expected to take away from this session was a conviction that the ‘Western’ history of ideas had to be broken down at its borders and reconstituted. I still, more or less, think that to be the case.

However, it seems to me that this cannot really occur in the absence of a more widespread recognition that the continuation of a tradition of ambitious historiography cannot be taken for granted. If there is no question of historians after the fashion of Glacken being in ‘the same boat’ as those scholars who seek to create scope for the needs and experiences of peoples beyond, beside and in spite of ‘the West’ then these projects are, at least, subject to many of the same storm systems.

I do not know what conclusion to draw from that conclusion. However, it has given me food for thought in the coming weeks and months.
Posted by Philip at 17:25