The PhD programme is a remarkably unstandardised institution. It varies wildly in its duration and parameters between countries, universities and disciplines. In the UK, scholarships are usually for 3 years and submissions are expected within 4 (when studying full-time). In many places, there is an 'upgrade' process where the candidate moves from the initial MPhil registration to the full PhD once they can demonstrate that they have what it takes to meet the full standards.

At my institution (Aberystwyth University, International Politics), we have no 'upgrade' as such (although there are endless 'monitoring' forms to be filled in each semester). As a less formalised but nevertheless highly invested rite of passage, we have instead what we call the 'IPRS' (the International Politics Research Seminar). This is a weekly event usually hosting guest speakers from outside the university; however, around this time of year, PhD candidates in their third years present their work to the department.

And so, this past Thursday was my turn. 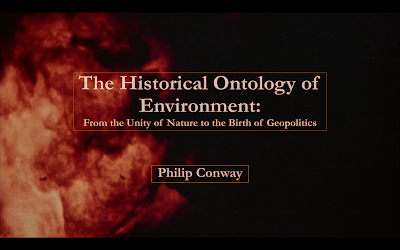 I basically attempted to present the entirety of my (as yet only partially written) thesis, section by section. 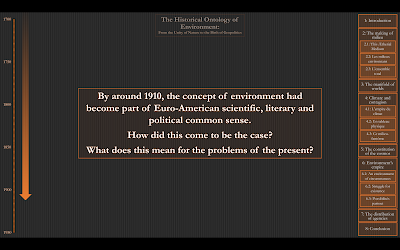 This was building on my other (shorter) presentations of previous years. 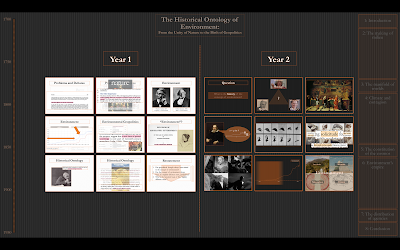 I won't try to summarise the argument here (not least because it is a work in progress). However, it starts with Isaac Newton's use of the word 'medium' and the association of this with the idea of a cosmic aether or fluid underpinning physical forces of various kinds. 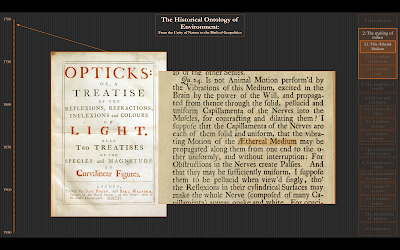 The 'medium' then becomes the French 'milieu' – a key term in both eighteenth and nineteenth century science (though for very different reasons). However, before getting to the English 'environment,' the thesis also takes a long look at the concept of climate as found, for example, in the works of Alexander von Humboldt. 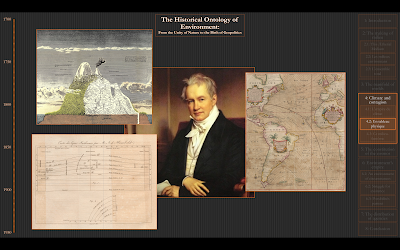 Well-known in certain scientific circles from the 1860s, the English 'environment' had been popularised, at least among literary and technocratic elites, by the start of the twentieth century. 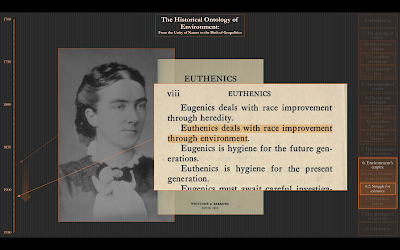 The objective of the thesis is, then, to discern and distinguish the complex (and often forgotten) nuances of these many layers in their specificity, thus more precisely informing (and perhaps troubling) contemporary articulations and interpretations.

What I'm still figuring out is how this history speaks to what I called (in the second slide, above) 'the problems of the present.' Environment circa 1910 is not, of course, precisely the same concept as that which we know from the 1960s onwards. It is not invested with the same moral force, nor does it entail the same conception of human agency.

However, it is, I think, precisely in the reversal of the distribution of agencies found with this concept at this time – 'environment' circa 1870 being something that subordinates and, circa 1970, something that is subordinated – that is really the key thing.

I'm going to rework variations on this presentation over the coming months – in Oxford in February, New Orleans in March and probably several more times through the coming year (intending to submit the thesis by the summer).

A work in progress, then, though, I hope, an interesting one even at this stage.
Posted by Philip at 18:22