#Citewomen: 1920s Edition; or, In lieu of a thesis update

I’ve been rather neglecting this blog over recent months (really, over the past few years). Being now deep into the later stages of thesis writing and rewriting, I can’t really put together a full update. However, in reworking my introduction over the past week, I came across a nice little anecdotal episode that I thought I would share.

As far as I know, the first monograph to construct a history of the concept of “milieu” was published in 1899 by Eugénie Dutoit (1867-1933). Die Theorie des Milieu was, in fact, her inaugural dissertation at the University of Bern (defended the previous year). Dutoit was, moreover, the first woman in Bern to study philosophy and obtain a Ph.D. She subsequently worked as a school teacher, journalist, and activist. 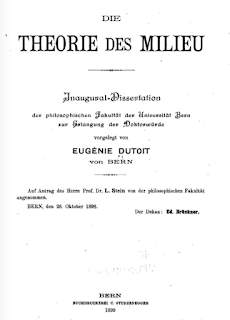 Founding and leading various educational and women’s rights organisations, she seems to have led an active public life in Bern and beyond. For one thing, in 1924, on behalf of the Fédération des unions nationales des amies de la jeune fille, she served as an Assessor to the League of Nations Advisory Committee on Traffic in Women and Children. This was standing in for one Mme. Studer-Steinhauslin who was absent through illness.

However, her dissertation seems to have remained her only published academic work.

In 1918, another Ph.D. dissertation was submitted to the University of Illinois by Armin Koller under the title The Theory of Environment: Part I: An Outline of the History of the Idea of Milieu, and its Present Status.

This topic, he noted in his preface, had been suggested to him in 1907 by Professor Martin Schütze (1866-1950). “As guide-posts were lacking,” Koller wrote, “at least I knew of none, I was bound to seek by accident and for a number of years.”

In 1922, Schütze himself noted in an essay that Dutoit's Die Theorie des Milieu was an “exhaustive and well-written dissertation.”  He also mentioned his former student Koller, into whose hands he had placed Dutoit’s work for the purposes of preliminary orientation and instruction. However, Schütze added:


“In the Preface, in which he gives an account of the development of his study, Mr. Koller fails to mention Miss Dutoit’s work, and gives a misleading description of the state of the problem confronting him. The subject, at the time that Mr. Koller was introduced to it, was not, as appears from his description, a primeval wilderness without paths and ‘guide posts,’ but an inviting district with its main lines of topography clearly traced and with the points of the compass plainly indicated.”

This was among both the first and the last citations that Dutoit’s work would receive. Koller had cited Dutoit five times in his endnotes but nowhere in the body text. Indeed, it is only because a copy of her dissertation at the University of California was digitised that I came to notice it.

While both these old dissertations are useful for my purposes (reconstructing the conceptual histories of milieu, climate, and environment), Dutoit’s effort seems to me to have been rather more sophisticated in its analyses, while Koller’s was really just a glorified literature review.

And so, a century ago, those few women to break into the boys’ club of academic philosophy (even if they weren’t able to stay) were already being forgotten.
Posted by Philip at 12:02