Andrew Kipnis on agency, ANT and the limits of ethnography; or, Does ANT have a politics problem?

The fabulous Hau: Journal of Ethnographic Theory has a new issue out. 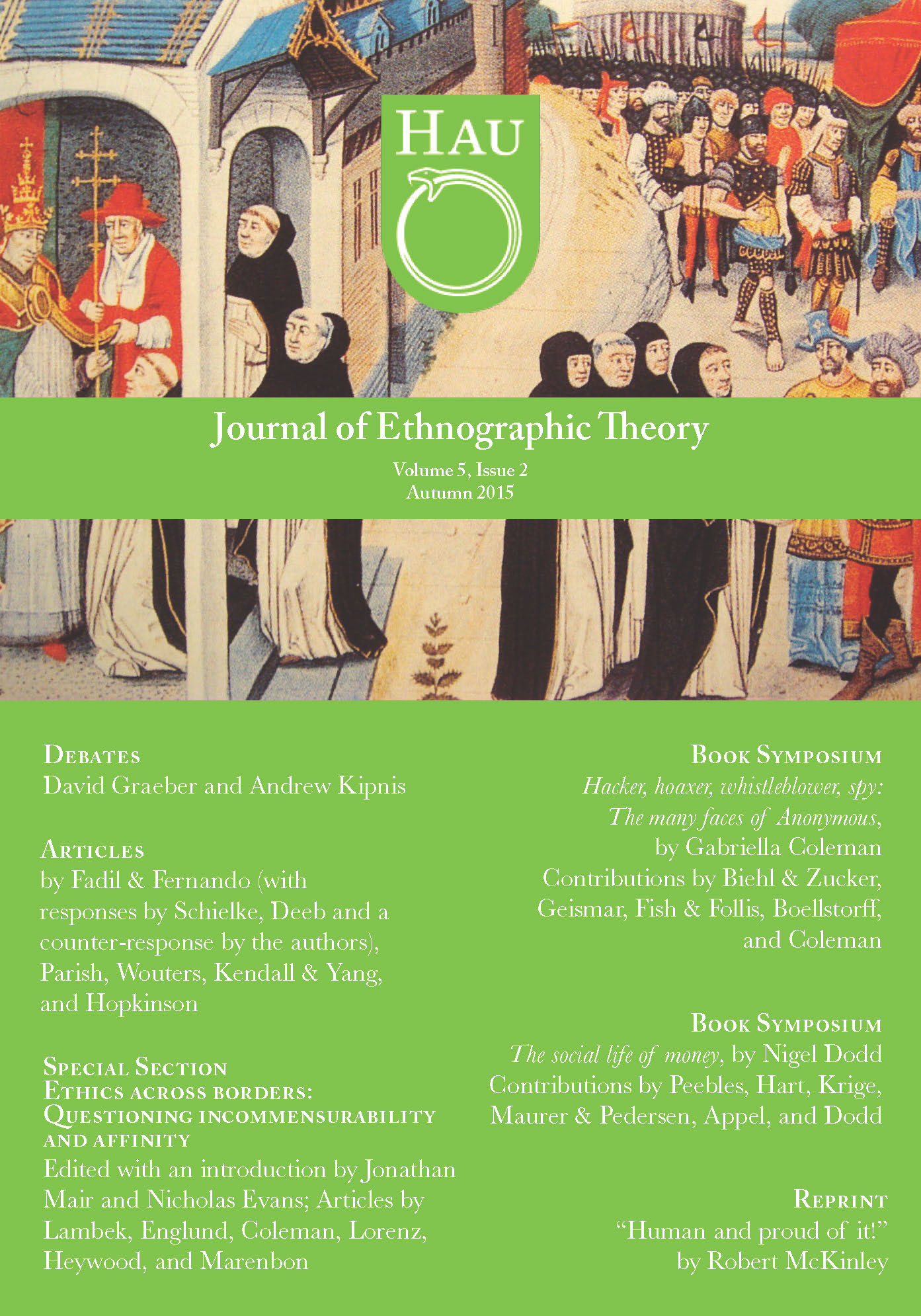 Among the articles is Agency between humanism and posthumanism: Latour and his opponents by Andrew Kipnis. It is the latest in a series of interventions in this journal on anthropology and the so-called 'ontological turn.'

It starts out with a thoughtful and well-reasoned argument that, in short, 'agency' as such is not really the important issue. This is rather similar to what I was trying to get at a few posts ago with regard to 'flat ontology.' The disagreements that many people have with ANT have more, I think, to do with its methodological prescriptions than with the philosophical underpinnings – or, at least, the ontological discussion needs to deal with the methodological aspects as well. Kipnis writes:


"The methodological problem that ANT poses for politically critical research is not so much that it considers the agencies of nonhuman entities, or that in “posthumanist” fashion it considers agency to arise in networks rather than to reside in the individualized subjectivities of conscious human actors, but rather that it requires researchers to engage in slow, painstaking, and careful ethnographic research." (53)

Ethnographic methods might be very important and underused in many of the social sciences but there are, quite simply, some questions that cannot be answered through the sorts of detailed, empirical, case study-based research that ANT insists upon.

This is also something that I was attempting to articulate in a paper I wrote a few years ago on ANT and IR, Offshore: Symmetry, Space and Materiality. I argued that offshore tax havens are an excellent example of the kinds of networks that not only cannot be traced in any particular detail in practice (the investigative resources of whole nation states struggle to get past these walls of silence, so what could a mere social scientist do?) but, more than that, their very untraceability is what makes them what they are.


Because ANT “starts from irreducible, incommensurable, unconnected localities” [Latour] it assumes disconnection as an omnipresent status quo, thus foregrounding connection as what is exceptional and, consequently, as what is to be explained. Moreover, it takes for granted that relational events and the traces thereof are accessible to the researcher in a quasi-ethnographic fashion. This is emphatically not true in the case of, for instance, tax havens, which are defined by their secrecy. It is not for nothing that tax havens are argued to be more accurately termed ‘secrecy jurisdictions.’ Take, for instance, the case of tax haven lawyers who utilise trust and confidentiality laws to shield their clients’ assets; their entire purpose is to make these links untraceable; these people are not ‘centres of calculation’ but rather centres of “calculated ambiguity”. One cannot trace these networks since secrecy, non-traceability, is precisely what makes these networks function. They create disconnection and presume connection – precisely the opposite of ANT.

This is, indeed, the experience of those who try to gauge offshore. A report for the Tax Justice Network compares the “subterranean system” of offshore to a “black hole” since it “is virtually invisible and can be somewhat perilous to observers who venture too close. So, like astronomers, researchers on this topic have necessarily used indirect methods to do their estimates, conducting their measurements from a respectful distance.” Or, as journalist Nicholas Shaxson (who has gotten as close to these networks as anyone) puts it, “[e]ven if you can see part of the structure … you can’t see the whole, you cannot understand it.” Another tax analyst uses the black hole metaphor: “Identifying tax shelter activity can be as difficult as finding objects trapped inside a black hole – their presence is known only through inference.”

ANT grew up, so to speak, in the information-rich environment of STS. Whether following scientists, engineers, lawyers or psychotherapists, Latour, for one, has always examined actors who were relatively indifferent to their being followed. Thus he can write: “Our slogan ‘follow the agents themselves’ is not for the dogs. To it we sacrifice everything.” This methodological principle can be raised to an absolute without missing out on too much. IR, by contrast, is frequently an information-poor environment. Or, more accurately, it has huge quantities of data to sift through but these are generally traces of traces of traces; too much data, not enough information. Moreover, many of its actors are likely to be quite hostile to the notion of being followed in anything like an ethnographic sense! The mode of inference particular to ANT is basically limited to the ability to join the dots between one material-semiotic trace and another; consequently, it is quite ill-prepared to confront phenomena characterised by untraceability. While IR can learn a lot from ANT’s radical empiricism, for example its insistence that well constructed descriptions are explanations, it cannot swallow this pill whole.

After that point, Kipnis' arguments, for me, go off the rails a little bit. After suggesting that we can grant 'agency' to everything provided that we distinguish between different kinds of agency (okay, fine), he attempts to smuggle some fairly unreconstructed humanism and Marxism back in (reconstructed, I might be able to deal with).

First, he criticises Latour's lack of attention to questions of power and economics.


"[…] the lack of discussion of Capital and Power in his seemingly encyclopedic “Anthropology of the Moderns” makes me cringe. How can capital not be one of the modes of existence for modern humans?" (54)

How 'capital' would work as a mode of existence, I have no idea. This is a criticism of AIME that has cropped up repeatedly, in various ways: 'you've not made [this thing that is very important] a mode of existence, therefore you are devaluing or ignoring it.' Capital would, in the context of AIME, presumably be an ontic rather than ontological entity. In other words, it would be something constituted by a heterogeneous complex of modalities rather than being a kind of being in itself. That doesn't devalue it as a concept (although Latour's disinterest in such concepts is no secret).

Capital, for Kipnis, is:


"an instituted agency that pressures us moderns to make our calculations selfishly."

The ease with which this force of nature is injected into the text so casually, as though it were something that operated independently, autonomously and without mediation, is striking. One needn't undertake only detailed, local, empirical case studies of 'capitalism' (what a task that would be!) in order to recognise the value of the insistence that one look for the mediators by which any given force, no matter how powerful, is assembled, produced and made to act in the world – even as this force exerts pressures that are irreducible to the networks that mediate, stabilise and utilise it. Divested of the excesses of its occasionally fussy and fastidious empiricism, ANT can still help us to understand this much. Perhaps this is the shared task or middle ground that Kipnis is trying to get at but it doesn't come across as such in his writing on this point.

He then rolls out a familiar trope that I also discussed in my previous post on 'flat ontology,' the alleged ignorance of power:


"I find Latour’s relative disinterest in human power relations mirrored in his lack of attention to the concept of power. If I were rewriting his conceptual framework, I would substitute “power” for “felicity/infelicity conditions” as the primary dimension for differentiating types of agents." (54)

Felicity conditions in AIME concern different ways of distinguishing between success and failure. Of course, each mode has a kind of 'power' of its own as each is a different way of acting, of existing. Using 'power' as a differentiating condition would simply be restating what that mode is (hence the concept adds nothing and is superfluous, which is precisely Latour's point about it).

In the end, Kipnis rather undoes his previous good work by making a mess of agency, somehow 'granting it to everything' but then insisting that it differs categorically from power and describing human agency as "that contradictory space we experience whenever we attempt to make a decision about the unknown" (56). Far from offering a minor modification to the ANT take on agency, this completely undoes it since it re-locates human agency in an essential human reflexivity (which sounds a lot like politics, from Latour's point of view) and, presumably, any capacities that human beings have beyond this are not 'human agency' (and so what are they?).

The distinction between agency and power I just find strange.


"Barack Obama or Bill Gates undoubtedly have more power than I do. They get to follow their proclivities or gut instincts across a wider range of contexts than I do and their decisions certainly affect a greater number of people than mine. But this power does not give them more agency than me." (56)

Perhaps it is just me but I find this to be an irredeemably knotted jumble of thoughts. Making agency a qualitative condition of a kind of thing (specifically, humans) and power a quantitative measure (where some 'have' more of it and others less), again, completely demolishes anything that might remain of the ANT-type conception of the world.

The likes of Obama and Gates are only powerful due to their particular locations within various networks of all kinds of actors. Yes, they 'have' power in a sense – when they move or speak, ripples issue out far out of proportion in amplitude to those from you or me – but these networks also 'have' them (the 'possession' of power works both ways). These landscapes are full of asymmetries – as are scientific laboratories or building sites. Power is everywhere, so much so that pointing it out is rather trite and serves to convey nothing more than the author's self-identification as a 'critical thinker.' The well-beaten drum of 'power critique' has less, I think, to do with the urgencies of the world than with the proclivities of the academy but that is perhaps another post.

None of this, I hasten to add, means that ANT doesn't have a problem with politics. The case study-centrism, the ethnographic fundamentalism (perhaps these terms are a bit strong but rather too much than too little…) – these close off many important research questions from examination. The centrality of the case study, particularly when articulated in its somewhat vulgarised form as part of a 'theoretical framework' to be employed by graduate students, has the effect of creating legions of researchers that are tremendously interesting and productive but can all too easily disconnect their matters of research concern from dissensus, conflict and the embeddedness of their own research in wider political processes.

In one sense, this is nothing more than an argument for methodological pluralism (in additional to the ontological pluralism that AIME brings with it), which is usually, in my experience, pushing at an open door with regard to getting people to concur. Institutional acceptance is another issue altogether.

I am not, in this post or previous ones, attempting to pretend that there aren't flaws and limitations in the ANT approach to social science (I, for one, do not intend to employ them in any direct fashion in my own thesis work). I am rather trying to get away from criticisms that are, by now, misplaced clichés and get towards something a bit more productive.

Not quite there yet but hopefully I'm making some progress – and the better parts of this Kipnis article have helped in that regard.
Posted by Philip at 17:00