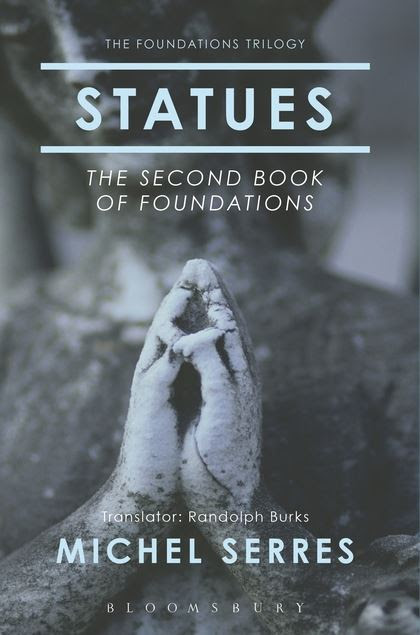 Michel Serres' Statues (first published in 1989) is getting a long overdue English translation courtesy of Bloomsbury Publishing.  November 2014 is the claim.  I find that Serres can be hit and miss but I'll be looking forward to this one.
Posted by Philip at 22:12 1 comment:

My post on chapter 8 of An Inquiry into Modes of Existence – 'Making the Beings of Technology Visible' – has just appeared on the blog, thanks to Adam Robbert. It includes some background, a short summary of the main themes and a speculative application of the ideas to thinking about 'artificial' and 'natural' borders within the context of critical geopolitics.

Overall I think the idea of a materialism based on materials rather than matter per se is an important one. Other people are producing somewhat similar ideas – Tim Ingold's Materials against materiality springs to mind – but Latour's iteration of the notion is powerful and provocative. It's certainly one of my favourite chapters of the book.
Posted by Philip at 16:53 No comments: 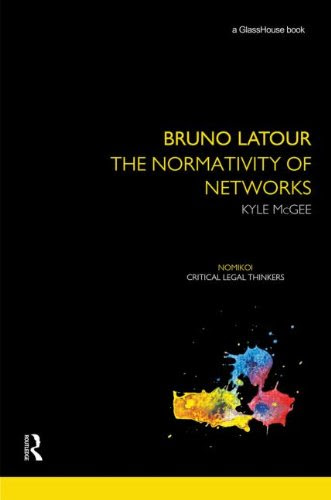 I'm currently reading the above.  I had to order it on inter-library loan (all the way from Scotland; thanks University of Glasgow!) as it's only available in hardback and for an utterly stupid price.  I hope it comes out in paperback soon; it's really very good.

For a start it's easily the best introduction to Latour's work I've read.  It is right up to date, including a discussion of the modes of existence project but that's not its only quality – it's written with stunning clarity, has absolutely no wasted words and is just generally very fluid and readable while at the same time being impeccably precise.  It comes as no surprise that the author is a practicing lawyer as well as being a legal philosopher!

I'm yet to get deep into the philosophy of law part so I'll reserve judgement on that for now.  But, based on early impressions, I highly recommend it to anyone wanting an introduction to Latour's work in general and, of course, anyone interested in socio-legal studies or anything of the sort should get their hands on it if they possibly can.

There are three extracts from the book on the AIME website (registration required):
The co-presence of [pol] and [law]
The ontology of lawyer jokes
Legal reasoning as de-stratification

I may write a (somewhat) more substantial review when I've finished the book.
Posted by Philip at 21:29 No comments:

The 'realists' take science to be a content provider – that is, science provides and certifies a more or less stable list of entities with which the philosopher can justifiably populate the world as they see fit.

The 'constructivists' also want to populate the world with a wide range of entities and to grant these beings their autonomy, their powers, their dignity.  However, they (a) are not prepared to grant science the right of unilateral list-writing, (b) they emphasise the instability of the list (as a necessary precondition of science itself as much as anything else) and (c) they insist, above all, on making science a constituent producer – that is, the fact of scientific production as an ongoing process must be factored in to any substantial discussion of scientific facts, including their mobilisation in world-population exercises.

It is not that scientific facts are reducible to their construction or instauration (that is, this is not relativism in the vulgar sense) but rather that discussing scientific facts severed from their subtending networks results in a dogmatism that precludes politics and a simplicity that does no justice to science.  In other words, populating the cosmos is a shared interest but opinions differ on how it is to be done.

There's far more to this dispute than this one, only partially explicated difference, of course, but this is a key part of it, I think.  For one side 'realism' means that any discussion of scientific facts implies an understanding of scientific processes and that this implication must be made explicit in the discussion; for the other side 'realism' means that one can and should ignore this implication and sever, at least in rhetoric, the facts from their networks.  It's the difference between a realism that thinks it misleading or even meaningless to discuss scientific objects in abstraction from the processes that stabilise them as knowable and hence articulable entities and a realism that thinks it the quintessence of realism to do just this.
Posted by Philip at 14:19 No comments:

Speaking of God in the present tense

[I actually wrote this post last November and saved it as a draft (long before the recent pluralism hoopla, although it relates to those exact same issues).  I'd forgotten about it until now so it's just been sat there.  I'm not sure why I didn't post it originally.]

I am [or rather was!] just reading Isabelle Stengers' Thinking With Whitehead.  Actually, I am re-reading part of it.  I got about half way through it about 18 months ago and then gave up.  It is a tough read!

One thought: the even-handed way that Whitehead's God is treated is very interesting.  Not just for the ethically and politically 'diplomatic' reasons of engaging with values, nor simply for the scholarly reasons of articulating a philosophy in its own terms without reactionary judgement.

God is an awfully difficult figure to kill off.  First of all in philosophical terms.  He has played some kind of role in most philosophies.  Sometimes He was largely a political addendum designed to ward off accusations of heresy (often unsuccessfully).  However, quite often His presence was a technical necessity.  So it is for Whitehead (according to Stengers).  That technical requirement needs to be taken seriously.  We cannot simply assume that the heart of these philosophies can be ripped out and there will be no adverse consequences.  "I am afraid we cannot get rid of God because we still believe in grammar," as Nietzsche put it.  How many traces of God remain in our allegedly secular discourses because we believed that mere disavowal would be sufficient to drive a stake through His heart?

Second, in terms of sociology.  Religion has performed far more profound functions in our history than simply being a bunch of explanatory tenets that people 'hold.'  Human beings are not analytical philosophers.  The intensely political elements of religion can't be written off just by appeal to the crimes of this confluence.  The Inquisition doesn't prove or disprove anything in and of itself, nor do the Crusades.

Not only do we still believe in grammar but we structure our entire civilisation around the Invisible Hand.  That is the major inheritance we have received from our religious 'past.'  Societies structured around the machinations of this ghostly spectre are, ironically, gradually made irreligious as they become socially atomised.  Why do so few Europeans of Christian genealogies religiously participate these days?  It is certainly not due to people getting more intelligent or rational.  Nor is it even entirely due to increased scientific education.  Few of us go to church any more.  That locus, that heart of the community beats ever slower, ever emptier.  That is our principle religious inheritance.  The Invisible Hand that gradually erodes the outstretched, visible hands of community.

There is so much more to God and to religion than in the atheists' imaginations - this I can believe.

Atheists and secularists of all stripes need to take God very seriously and not just as something to 'fight against.'  God is not nothing.  We may convince ourselves that the wind whistling through the rafters is not a ghostly howling - but we can hardly write off the eerie draughts as non-entities.  We cannot shunt the whole assemblage into a category marked 'non-existent' and then forget about it.  We would be replacing draughts with a vacuum.  Likewise with God.  We needn't accept either the all powerful, transcendent God of Religion or the fragile, immanent God of certain philosophers but we would do well to heed the various philosophical, political, cultural, social Gods who have been very real within our communities in the past (and remain so in the present).

We may insist that God is an unholy amalgam but we should not write those parts off as trivial, nor expect that we will not miss them, nor arrogantly assume that they can be so easily replaced.
Posted by Philip at 00:34 No comments: