I'm just starting to read Kennan Ferguson's William James: Politics in the Pluriverse, a book that I've been meaning to get hold of for some time. So far it's a good read. 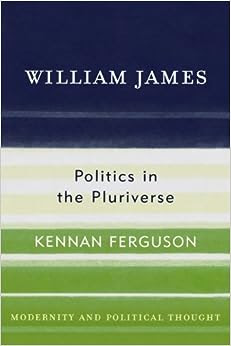 The early part of the book attempts to dissociate James' pluralism, a term that he popularised in the late nineteenth century, from the course that word took in the twentieth.


James created pluralism as an anti-Hegelian distrust of all universalist systematizing—an anti-teleological ethos that emphasizes the profound and meaningful differences in the worlds of different people. In short, James' pluralism was prescriptive.

Over the course of the twentieth century, however, the term pluralism came to primarily mean something far different, something merely descriptive. Pluralism is now understood as referring to the fact of human difference, the unpleasant and sometimes unavoidable incommensurability of values that threatens people's abilities to build political institutions, share meanings and even communicate. (15)

Later the book goes into the connections between Continental and American philosophies and a Jamesian 'onticology' of objects.
Posted by Philip at 10:01 1 comment:

Pluralism—neither idealism nor realism but, above all, not absolutism

If philosophical absolutism can be defined as the expectation that a philosophical schema can (and should) be capable of incorporating any thing of any kind, anywhere at any time into its tenets, postulates and axioms with no remainder then we will notice that many philosophies termed ‘realist’ and ‘idealist’ have much in common.

A pluralist philosophy not only expects to encounter entities that baffle, dissemble and defy but welcomes such virtuous incomprehension—but then, of course, so may an inquisitive, curious and expansionist absolutism. What distinguishes pluralism is that it does not attempt to explain, subsume or incorporate as such; instead, it attempts to facilitate the terms of the encounter, to work through the situation as a specific event, to think through the middle, penser par le milieu.

Many ‘realisms’ would be better termed 'absolutisms'; and it would be well noted that they are not so dissimilar to their declared others. Pluralism does not mean idealism; on the contrary, it has no necessary affiliation to either side of that conflict. Pluralism needn’t grant ‘ideas,’ ‘mind,’ ‘language,’ ‘discourse’ or ‘consciousness’ any particular privilege. Indeed, it’s difficult to see how a properly pluralist philosophy ever could.

Pluralism must be realistic with regard to itself. All its realism must derive from—no, be subsequent to—this first demand (note: not first principle).

Realisms tend to operate with an implicit and more or less denied self-denial that I have characterised with the phrase ‘of course, I might be wrong.’ Few philosophers are such megalomaniacs as to think that they have finally—'at last!'—uncovered the real secret key to the hidden order of things. However, an all too thin concept of ‘speculation’ permits the argumentatively tentative (although often rhetorically bombastic) suggestion that this or that particular bundle of words and pages may, finally, have pinned down the butterfly, uncovered the thought that would allow us to stop thinking.

Pluralism operates, as I have written previously, with a much ‘thicker’ and more demanding notion of speculation. Philosophical action, not unlike action in general, results from existential demands. Its speculative character must be understood in relation to these demands. Thought untethered from a real problem is simply practice in the sense of 'today I practiced my guitar.' If a real, pressing, urgent problem is not present then one must be simulated. Nothing can be said against this but it is plainly an example practice qua preparation.

If philosophical thought—action—has a virtue (and I don't take the 'if' lightly) it is realised 'on stage,' as it were; in the midst, in the melee, in the milieu.

Pluralism can be distinguished from other comparable terms by the fact that it never takes 'reality' as its problem. The realist qua absolutist seems to say 'anything less than reality as a whole, without remainder, is not worth my time.' There is a political consequence that does not 'follow from' such philosophical pomposity but closely neighbours it: any ignorance, any foolishness, any deception relative to the Real that is the one and only real, perennial Problem is a matter of concern that must have Truth spoken to its power, to its plainly illegitimate Being. Pluralism, on the contrary, can choose its battles neither arbitrarily nor dogmatically. Not every disagreement on the register of knowledge must become public, political. In fact, many disagreements simply do not matter. That 'not mattering' is the new route to the good life. To live well is to live with, well enough—to 'I can live with that.'

This is perhaps the fault, then, of materialism, as generally conceived: it cannot ever reach the truly immaterial, that which simply does not matter. If everything, everywhere is of a common base and follows common laws and if avowed acknowledgement of all that is ontologically subtensive is a matter of public order then any divergence from reality, no matter how trivial, becomes a matter of public concern. On the contrary, if differences must do more than merely diverge in order to become a problem, and if 'reality' as such simply cannot ever become meaningfully 'problematic,' then coexistence becomes remarkably more thinkable.

The question then really becomes: is 'coexistence' that which we are working for? For many the answer to this is 'no' (they have other agendas) and that is the terrain on which arguments should proceed since this is what truly divides; this is terrain worthy of a friend/enemy declaration; endless feuds over relations and substances and so on are not at all as deserving—these are examples of philosophy for its own ends.

To the pluralists, problems; to the absolutists, perennials. This chasm runs far deeper than idealism versus realism, and is many times more urgent an area for exploration.
Posted by Philip at 20:49 3 comments: